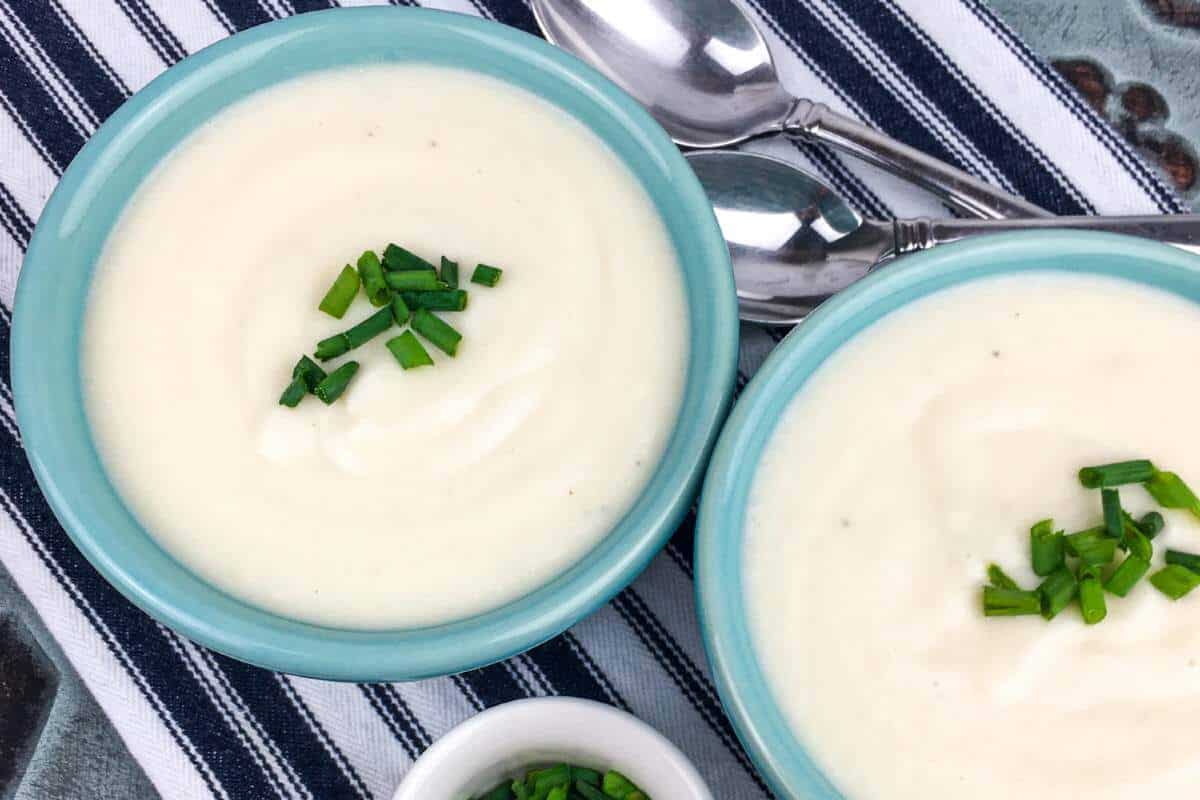 If you love creamy mashed potatoes, you’ll definitely love Vichyssoise. Pronounced “vi-shē-ˈswäz”, this French soup is also called Chilled Potato Leek Soup. This cream-based soup is primarily made up of pureed leeks, potatoes, chicken broth and you guessed it, cream. This is exactly the kind of soup you want to serve on warm days. Vichyssoise is traditionally served cold, but you can also have it hot.

I first had it on an anniversary trip in Quebec some years ago and completely murdered the pronunciation. I’m glad our server was nice enough to not call me out on it. Lol. In my head, I just read it as “vishi-swazz”. Yes, this is a call for help, if any of my beloved Divas are French or can speak French, I need a lesson or two.  Just hit me up on the comments below! 😉

This hearty, creamy, and luxurious soup was  created by Louis Diat a French Chef in 1917, who was then working at the Ritz Carlton Hotel in New York. The name Vichyssoise is coined from the Chef’s hometown, Vichy, France. The soup was served cold to help patrons to cool down in the summer heat. Remember that this was before air conditioners are widely used, so sipping on a cold soup is surely appreciated.

Another trivia? It was originally called Crème Vichyssoise Glacée. It was inspired by Louis’ favorite childhood soup of potatoes and leeks that his grandma used to make. Although other sources say it was inspired by another French soup, Potage Parmentier which is quite like a hot version of Vichyssoise. While others say the original inventor of the soup is chef Jules Gouffe in 1859.

Whoever it was, all thanks to him I found another soup to obsess with. I mean how could you not? I looked up this soup right when we got home from that trip. I was pleasantly surprised by how easy it is to make my own vichyssoise from my own kitchen! You can also serve it any way you want, for any season. Serve it cold, warm, or hot – it will still be just as good.

Serve this soup the next time you want to show off your culinary skills and knowledge to your friends and family. The Vichyssoise is not only rich in flavor, but in history too! So, give it a try, and feel free to share your own Vichyssoise story in the comments below! 😉