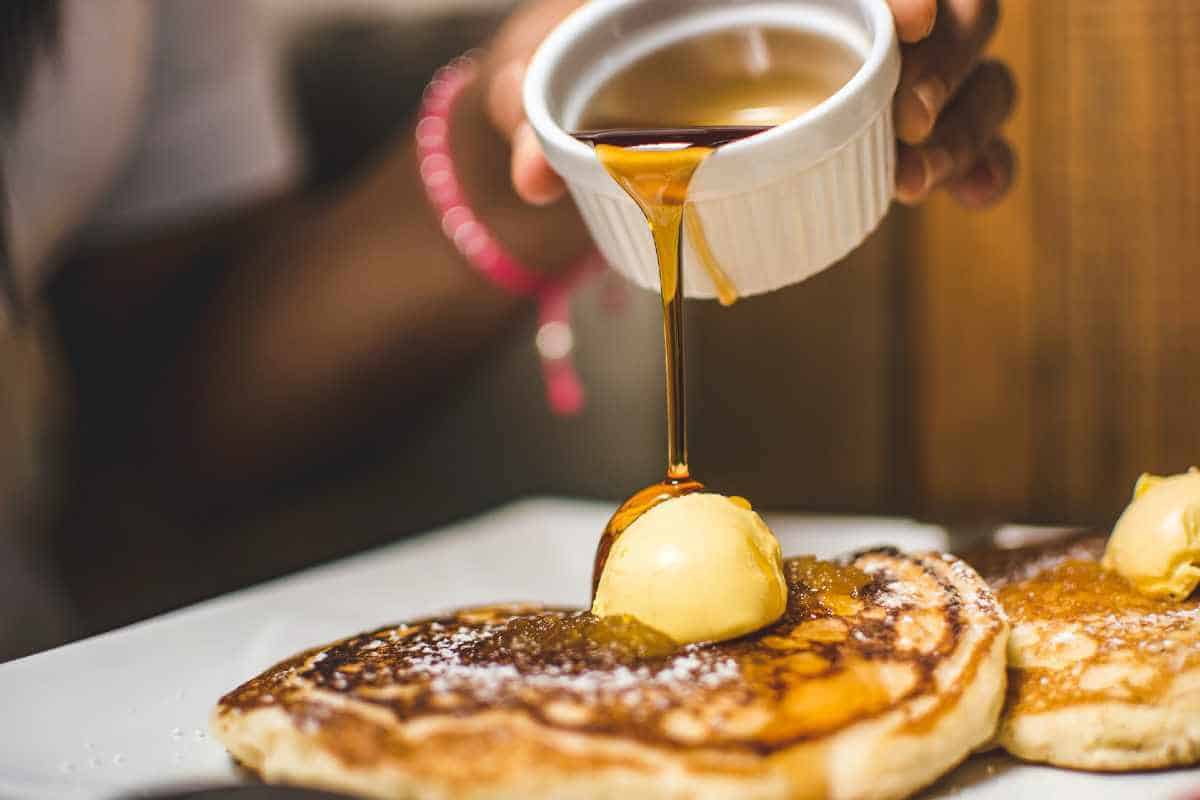 Maple syrup is a sweet, sticky liquid that comes from maple trees. It’s a traditional part of many breakfasts in the US and Canada. But what if you want to make pancakes on a weekend and you find there is no maple syrup in your cupboard? Or do you want to use some to glaze your carrots for Sunday dinner?

Luckily there are other substitutes that can do just the job! Tasty, affordable and easy to use? We found out…

What Is The Difference Between Real Maple Syrup And Other Syrups?

Real maple syrup is made by boiling sap from the sugar maple tree. The sap is mostly water but contains about 2 percent of a sweet, sticky substance called maple sugar that’s good to eat.

Maple trees are most common in Canada and the northern part of the US, hence why maple syrup is commonly associated with these areas.

Other syrups, like corn syrup and honey, are made by boiling down the sweet juice of plants and are seen as substitutes for maple syrup because they’re also fairly thick, though usually not as earthy in flavor.

Another, which you might notice on the ingredients label of any syrup, is that most other syrups are made with additives like colors and preservatives. Maple syrup isn’t, which means it doesn’t last as long after opening, but also means there’s less junk in it.

What If You Don’t Have Real Maple Syrup On Hand?

Fortunately, there are other substitutes that can do the same job as maple syrup. Honey is one. It is very similar in sweetness and thickness, though it won’t have quite the same earthy flavor. You could also use corn syrup or molasses, but keep in mind these are both much sweeter than maple syrup.

Honey can be used as a replacement for real maple syrup in most recipes, though it won’t have quite the same earthy flavor. It is very similar in sweetness and thickness and goes well on pancakes and waffles. It is available in most grocery stores which makes it a popular alternative.

Though not as thick as maple syrup, corn syrup is another good alternative. It is very sweet and has a similar consistency to it. It is widely used in cooking and baking, as well as a sweetening agent.

It is famous for its use in cookies, pastries, caramels, marshmallows and cotton candy. It costs around $0.76 on average per 14 oz bottle making it a cheaper alternative.

Molasses is again very similar in flavor, color and thickness. Molasses comes from the processing of sugar cane and it’s made when the juice is boiled down, which makes it sweeter than regular sugar.

It isn’t suitable for all recipes such as cakes, but is good for gingerbread, baked beans and barbecued meats.

Although not actually a syrup, brown sugar is another good option to use on pancakes and waffles for example. It’s especially good when paired with butter or fruit slices on toast or French toast.

Maple brown sugar syrup can be made by boiling maple syrup with one part brown sugar until it thickens slightly. It is inexpensive and can be stored in a jar. You can purchase it for $1.66 on average per 16 oz jar.

You can also use agave nectar as a substitute in many recipes such as dressings and sauces. It is sweeter than maple syrup, so you’ll need less of it, but has a mild flavor that works well in baking and dressings or on sauteed fruit. This can be bought in most health stores and costs on average $2.36 per 11 oz bottle.

Date syrup is made from dates and water, but contains similar levels of sugar as maple syrup does. If you prefer the taste of dates, this is a good alternative. It has a unique flavor and will give your cooking a unique taste, but it works well in marinades for meat or poultry, as well as on eggs and pancakes.

Most stores will sell it, but you can make your own by boiling dates in water until they become soft and runny.

Can I Use Brown Sugar Instead Of Maple Syrup In My Recipe?

This depends on what you are cooking, as brown sugar is not the same as maple syrup. Brown sugar is simply white sugar mixed with molasses, which means it will be much sweeter than maple syrup and with a different flavor.

However, brown sugar may work as a substitute in some recipes such as baked ham because it has a similar taste to the marinade ingredients.

If you’re simply looking to add a little sweetness or a hint of flavor, then try some honey. It’s a good substitute because it’s not as sweet as brown sugar and has a similar consistency to maple syrup.

How To Substitute Honey For Maple Syrup In A Recipe?

Be aware that honey does not work for all recipes and it will affect the flavor and consistency of the dish when compared to maple syrup. However, it works especially well in baked goods such as breads, biscuits, cakes and cookies.

Can You Make Pancakes With Honey Or Agave Nectar Instead Of Maple Syrup?

Yes, you can make pancakes with honey or agave nectar. It’s sweeter than maple syrup and will add a little extra sweetness to your pancakes. You may also want to add eggs because agave is acidic and it works better if paired with an acidic ingredient such as vinegar or lemon juice.

However, be aware that the taste will change since honey has a very distinct flavor and doesn’t contain as much sugar, so the pancakes won’t be as sweet. It’ll also make them thinner because of the runny consistency of honey.

Is There A Vegan Substitute For Maple Syrup?

In short, yes there are. However it’s not going to have the same flavor or consistency as real maple syrup so there will be some trial and error involved to get it right and tasting nice.

For example, if you’re going to use date syrup, then add an equal amount of water to it because it’s so thick. This works well when used for sweet potatoes,

but may not be ideal for something like pancakes because of its consistency – it will make them too runny.

Be aware that some of these substitutes are processed sugars with slight variations, so all-natural maple syrup is the healthiest option if you’re making vegan pancakes.

Honey is another substitute that can be used in baking or to add a hint of sweetness to pancakes, but it contains more sugar and can change the consistency of some recipes and dishes – and isn’t vegan.

If you’re looking for a vegan option, there are healthier sugars such as date syrup that work well in sweet potatoes or pancakes as an alternative to maple syrup. However, it’s not as healthy because of the processed sugar content.

Importantly, keep in mind the different flavor profiles of all these substitutes so you get your dish tasting just right.