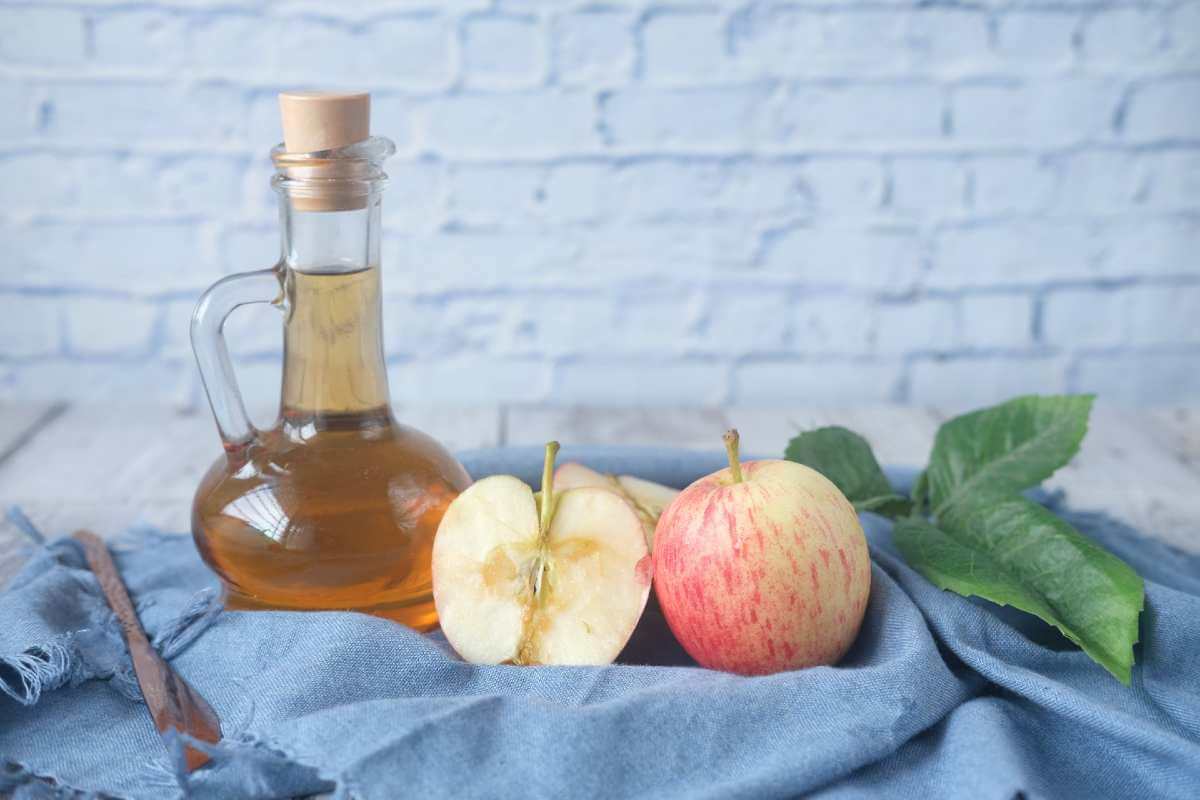 What Exactly Is Apple Cider Vinegar And What Does It Taste Like?

Apple cider vinegar is a type of vinegar made from apple juice. It typically has a strong but pleasant flavor that ranges from sweet to sour depending on the apples used.

While it can be consumed straight, it is often diluted with water or added to recipes. Indeed some manufacturers add extra sugar to make it more palatable.

Apple cider vinegar generally has a sweet and sour flavor. It can also have a very strong, sharp taste. It typically is used to add flavor to dishes such as salad dressings and marinades, or to create a sour taste such as in pickles.

Although apple cider vinegar is very popular and widely used, there are plenty of tasty alternatives to tickle one’s taste buds! What are they? We found out…

3. Mix 1 Tbsp. white vinegar with 2 tsp. honey in a small bowl. Add 1/2 cup fresh apple juice when ready to serve the dressing on salads or vegetables.

4. Combine 1/2 cup of water with 1/2 cup of pineapple juice. Add 2 Tbsp. white vinegar and 1 Tbsp. sugar before bringing it to a boil in a saucepan on medium heat. Combine together until the sugar dissolves then let it cool before using it as a marinade for meats.

5. Mix 1/4 cup water with 1/4 cup red wine vinegar before cooking or adding to salads or vegetables.

6. Combine 2 tsp of lime juice, 2 Tbsp. white vinegar and 3 Tbsp. brown sugar in a bowl. Add 1 cup of water before combining it with the sauce or marinade for meats or vegetables.

7. Combine 3 Tbsp. orange juice with 2 tsp. white vinegar and 1 Tbsp. honey in a bowl to make your own flavored vinegar for salads and marinades.

What Is The Healthiest Apple Cider Vinegar Substitute?

Balsamic vinegar is the healthiest apple cider vinegar substitute. It has a lower sugar content than other kinds of vinegar and contains more antioxidants than any other vinegar.

Balsamic vinegar has a very rich flavor and is often used in dishes with meats, cheese, vegetables, or fruit. It can be used to make salad dressings, marinades, or glazes for meat.

What Health Benefits Does It Provide?

The nutritional value of balsamic vinegar comes from the vitamins and minerals found in the fruit. For example, balsamic vinegar is rich in potassium which can help maintain electrolyte balance, control heart rate and blood pressure.

It also provides vitamin B6 which helps maintain a healthy immune system and contains minerals such as manganese and iron which help maintain healthy bones and support the body’s metabolism.

What Are Some Substitutes For Apple Cider Vinegar When Baking?

Use kiwi juice as a substitute. It has a similar consistency to apple cider vinegar and a very similar flavor.

For baking cakes, puddings and pies…

Use pineapple juice as a substitute. Apple cider vinegar typically makes baked goods denser because of its low sugar content. Pineapple juice has an almost identical acidity level and sugar content so it serves a perfect alternative.

What Are Some Substitutes For Apple Cider Vinegar When Cooking?

Lemon juice or orange juice are great alternatives. Both have similar flavors and acidity levels. The way to do it is to mix 2 Tbsp. of orange juice with 1 Tbsp. of balsamic vinegar then simply add it to vegetables or salads.

You can use raspberry juice as a tasty alternative. Why? It has a very similar flavor, consistency, and acidity level to apple cider vinegar.

Use red wine vinegar or white vinegar instead of apple cider vinegar. Again, they have similar acidity levels and can be used to make sauces or marinades for meats such as steak or chicken.

There are also several ways to use apple cider vinegar in place of other liquids when cooking. Here are some suggestions:

What Are Some Substitutes For Apple Cider Vinegar When Drinking?

For drinks with a sweet flavor use lemon juice as a substitute. It has a similar acidity level and has the same color.

For drinks with a sour flavor use lime juice instead of apple cider vinegar. Both have very similar acidity levels and colors. An example of this would be in a recipe for iced tea.

What Are Some Substitutes For Apple Cider Vinegar When Making Marinade?

Again white wine vinegar is a good alternative and works very well as a marinade for vegetables like broccoli and cauliflower.

What Is The Best Organic Apple Cider Vinegar Substitute?

What Is The Difference Between Apple Cider Vinegar And White Vinegar?

Can You Substitute Apple Cider For Red Wine In Cooking Recipes?

While apple cider and red wine have a similar flavor, they are different in alcohol content, sugar level, color, and acidity. These important variations mean that apple cider is not recommended as a substitute for red wine.

For chicken dishes such as chicken piccata, substitute the red wine with white wine vinegar or lemon juice instead as they are both more acidic.

Apple cider vinegar has a multitude of benefits and luckily, substitutes, which can be used as an ingredient in cooking and baking, such as salad dressings or marinades.