Substitute For Celery: We Discuss The Tasty Options 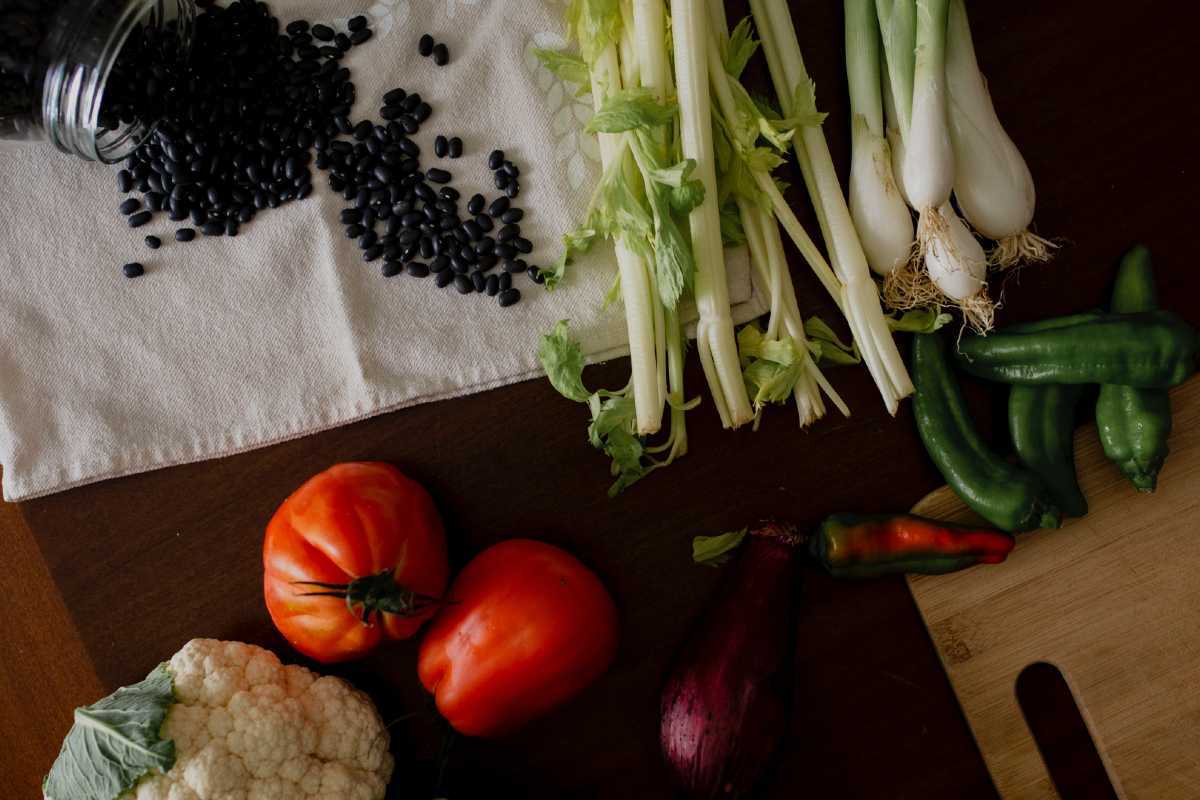 Celery is a popular and widely used ingredient in many dishes all over the world. However, it is not to everyone’s taste. We discuss whether there are any substitutes and if so how to use them.

6 Tasty Vegetables That Are A Perfect Substitute For Celery

Celery is a versatile and important ingredient in soups, salads, and many other dishes. It complements other ingredients with a unique flavor and smells that cannot be easily replaced. That said, there are many vegetables that can be used as substitutes for celery to make your recipes tasty and delicious. Here are 7 of those tasty vegetables…

If ever there was a vegetable that could be used to replace celery, it would have to be asparagus. In fact, the two vegetables are often used together in recipes such as salads and appetizers.

Asparagus has a distinct flavor that is unlike anything else, but it has a celery-like crunch with a similar shape and texture.

This vegetable is often used as an alternative to cabbage because, like celery, it has a very distinct flavor that can be difficult to replace. The most common use for this is in recipes that use celery and cabbage together such as salads or stir-fries because they complement each other so well.

However, it can also be used as a direct replacement for celery in recipes like soups and stews.

Bok Choy is similar to celery in that it has some serious bite to it when raw, but when cooked it can be turned into a flavorful delight that is similar in size and shape.

It also tends to be slightly more fibrous than celery, so you might want to consider this when deciding how much of it you need in your recipe or dish.

This is another popular vegetable that can be used to replace celery in most recipes. It is also very versatile because it can be eaten raw or cooked, which means you are not limited to how you use it and can get creative with it.

Zucchini is usually sliced up and cooked like celery before being added to salads, but it has a much milder flavor than its counterpart. If you want to eat it raw, you can grate or julienne this vegetable and use it as a topping for your salads.

This is definitely one of the stranger substitutes on our list because celeriac has such a unique flavor that many people simply love. However, it works well as a good substitute for celery.

Celeriac is basically just a large root vegetable that can be boiled and mashed as if it were potatoes. This makes it the perfect alternative to celery in most dishes because of its similar texture and flavor.

You can also slice this up and fry it like traditional celery, which is why it makes an excellent replacement.

Green beans are another ingredient that can easily replace celery in many dishes. They make a good substitute because they have the same texture and flavor, and their color adds beauty to any dish you use them in.

Green beans are great for soups, salads, appetizers, and even main dishes. You can slice them up and fry them as a replacement for celery, or you can boil them as well.

This is another vegetable that is great as a substitute because it has the same crunchy texture as celery without being too similar in flavor. It is also one of those foods that really make a dish look more appetizing with its bright color.

Baby corn has similar qualities as celery, but it can also be used to replace it in your soups for instance. It adds a little sweetness to the dish that you cannot get from just celery on its own. This is why it is often seen as an option for people who are trying to reduce or cut back on sugar.

Celery Salt Substitute: 3 Helpful Tips For When You Run Out

If you find yourself without celery salt when your dish really needs it, don’t panic! The following are three easy substitutes that are just as tasty as the real thing.

1. Use kosher salt and black or white pepper

Kosher salt has a flavor similar to celery salt, so all you have to do is add some black or white pepper. This is best for dishes where celery salt is used as a seasoning, not an ingredient (for example deviled eggs). You can also try using half kosher and half celery salt if you find the flavor a little bland.

Dried minced onion looks similar to celery salt, so this is another good choice for seasoning. All you have to do is add some dry parsley for extra flavor. This works well in dishes like macaroni and cheese.

This is perhaps the easiest substitution of all, but make sure you don’t use too much. If it tastes salty, that means you’ve added too much. This works well in dishes where celery salt is being used as an ingredient, not a seasoning, for example, tuna casserole.

Don’t Like The Taste Of Celery In Stuffing? How To Substitute It

There are many ways to substitute for celery in stuffing, it just depends on what you want to use. You can use fennel, garlic, or leeks for example.

You could also try using onion instead of celery. Celery has a much more distinct flavor, so the onion will have to be stronger in order to get that same taste. Onions are also crunchier than celery, which might give your stuffing a slightly different texture but it should still be good!

Another option is fennel, which has a similar mild taste to celery. If the celery you’re using is a bit more on the bitter side, fennel will give your stuffing a sweeter taste and give it a nice light texture. Not to mention, fennel looks similar to celery too.

Of course, you can just leave out the celery entirely and double up on another ingredient that you enjoy, such as onions or carrots. You can also try to roast the celery before adding it to your stuffing so that it adds a nice flavor instead of just the crunch.

What Are Some Good Celery Substitutes In Soup?

Soup is a dish where celery can be very useful, especially when it comes to adding a little bit of extra flavor, but if you don’t have any on hand you could try using green beans instead.

Green beans can easily replace celery in a lot of soups, especially vegetable soup. Perfect for when you want something a little bit lighter than the usual celery flavor, but still want to enjoy that familiar taste.

Baby corn is another option. Its crunchy texture is very similar to celery, but it also has a sweet flavor so it will give your soup an extra kick. This works well for soups that are also creamy, like cream of celery.

You could also try using fennel, which is milder than celery so it will give your soup a nice flavor without being too strong. On the other hand, if you’re looking to give your soup that little kick but don’t want to add something too strong, try adding a few celery leaves.

These have the same flavor as celery stalks but are milder so they work well in most soups without being overpowering.

How Can You Substitute Celery In A Stew Recipe?

Luckily there are many ingredients that can be used in place of celery when making a stew. One option is to use green beans, which are often used in chicken stews because they have a similar flavor and texture.

Another option is to try adding jalapeno peppers, which will give your stew a nice kick and pair perfectly with other flavors in the dish such as tomatoes or onions.

What also works well are other green vegetables such as peas or broccoli. When cooking, add these near the end so they don’t lose their freshness and color, and they’ll give your stew a nice little crunch. If you’re looking to add some color or texture, celeriac root also works well. This is the same as celery but is white and sometimes has a purple tint to it.

Spinach is another popular option. It’s perfect for stews that aren’t cooked for too long because spinach can lose its flavor or color if overcooked. One of the bonuses to using spinach is that it’s often very cheap, so if you’re trying to make your stew on a budget spinach is a great option.

Ginger works well too, but you have to be careful that it doesn’t overpower the dish or your taste buds. Ginger is especially good for stews with chicken or beef because it helps bring out the flavors in these meats.

Other alternatives are chayote squash and zucchini slices, each of which will add a nice soft texture to your stew along with some extra flavor. They work very well with other vegetables and meats in the dish, which is what you want when making stew.

Alternatively, you could use carrots or parsnips as they have a similar taste to celery. Just like with spinach, it’s important to make sure you add them during the last stages of cooking so they don’t overcook.

If you are looking for something that’s on the sweeter side, you could try substituting celery with fennel. This works best in stews that include tomatoes or other sweet vegetables like carrots, potatoes or corn.

Cranberries can also be used, especially in rice-based stews such as Indian dal. The cranberries will give the dish a nice color and sweetness, but similarly, make sure to add them near the end so they don’t overcook.

As explained above there are many ingredients that work well in place of celery. When making recipes, soups, or stews – green beans, jalapeno peppers, cabbage, lettuce leaves, and broccoli are great examples. Spinach, ginger, and carrots are also great options if you want to keep things simple.

Luckily for us all there are many options to choose from that work for all tastes and preferences, so enjoy experimenting!