What Are the Foods High in Probiotics? 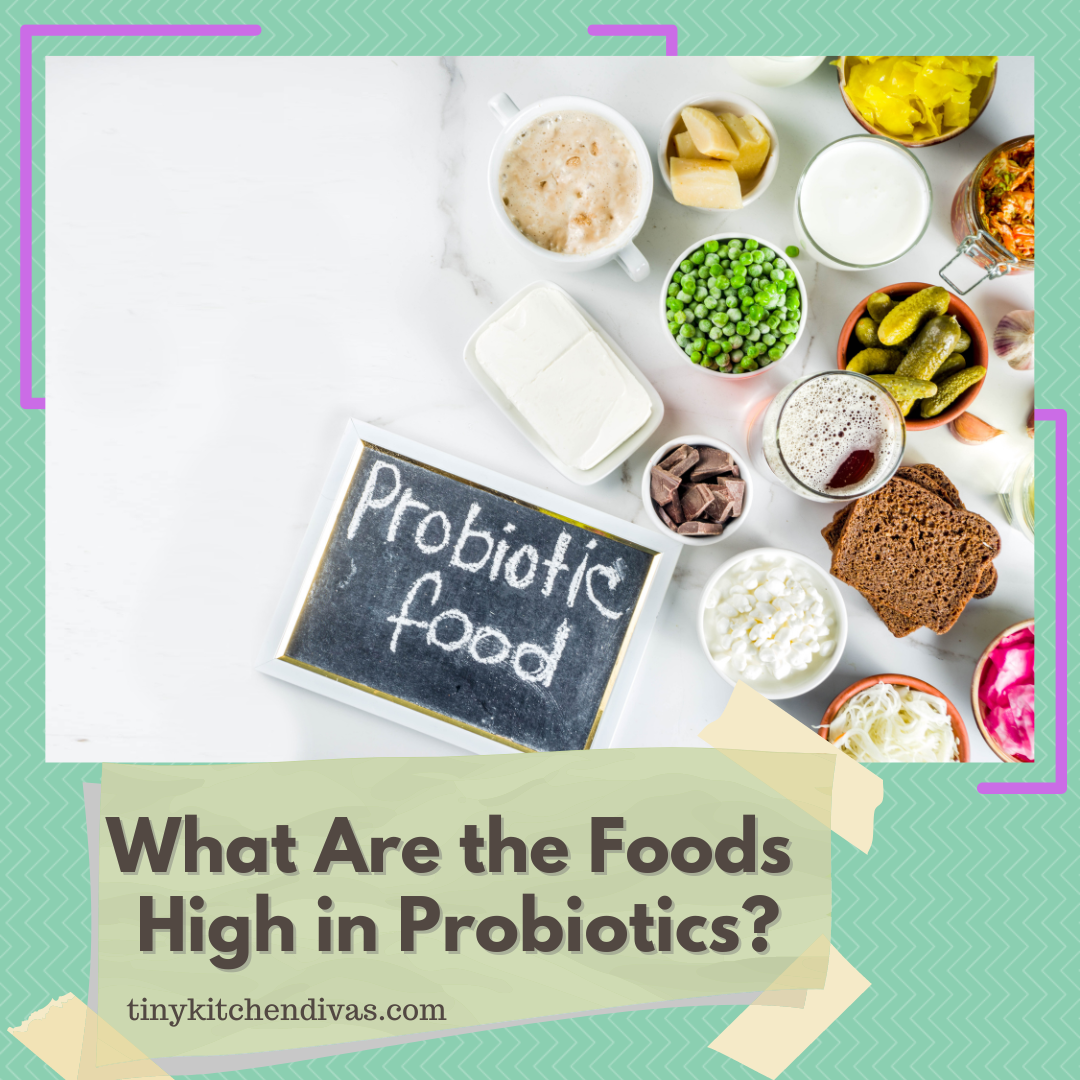 While probiotics are crucial for gut health, it can be challenging to identify the foods that contain them. It’s crucial to understand what meals to eat if we wish to consistently consume a variety of probiotic-rich foods.

You can increase your intake of probiotic foods by following the advice in this article on gut-friendly meals. In order to assist you achieve optimal gut health, we’re offering a list of the top probiotic-rich meals.

How Do Probiotics Work?

Probiotics are living bacterial microorganisms that have characteristics in common with the good bacteria that already reside in your gut, called the microbiome. Only if a live bacterial microbe you consume benefits your health can it be considered probiotic.

Your body’s natural microbiome, which resides in and on it and is mostly found in your gut, is stimulated and strengthened when you eat foods high in probiotics. According to research, probiotics help our immune systems function better, our ability to absorb nutrients, and our overall health.

Aside from natural food items, you can also consume probiotic supplements like Casa De Sante’s FODMAP Digestive Enzymes, Prebiotics, Probiotics & Postbiotics. This product contains PreforPro prebiotic which increases the activity of beneficial bacteria. Because PreforPro isn’t fiber or starch-based, the prebiotic doesn’t cause digestive discomfort such as bloating and flatulence.

Lactic Acid Bacteria: What Are They?

Because they aid in the digestion of food and produce lactic acid, which is crucial to the process, lactic acid bacteria are good for the health of the gut. This “good guy” bacteria also aids in maintaining a healthy pH level in your stomach, which inhibits the development of dangerous bacteria.

Is There A Distinction Between Fermented Foods And Probiotic Foods?

Many people believe that probiotic foods are also fermented and vice versa. Probiotics are found in all fermented foods, however not all foods that contain them are fermented.

Salt, time, temperature, and an oxygen-free atmosphere are the four elements that the lactic acid fermentation process of vegetables uses to convert fresh vegetables into preserved ones. This method produces lactic acid bacteria, which aids in food preservation and the production of advantageous substances like improved vitamins and antioxidants.

Some probiotic foods, especially yogurt sold in large quantities, are fermented, pasteurized, and then cultured. After being pasteurized, a product can be cultured to reintroduce probiotics made in a lab.

The Top Probiotic Foods Are Listed Below:

Lactose intolerant folks who want to eat probiotic-rich foods might try goat milk yogurt. Yogurt can be used to make smoothies, savory snack dips as Olive My Pickle’s Muffuletta Dip, or simply as a snack when paired with fruit and nuts.

The best yogurt for your digestive system is one that is high in fat and very low in sugar. Although raw dairy can be more difficult to find — it’s often available at local farmers markets — it is also preferred to pasteurized dairy.

Since yogurt is not recommended for people with lactose intolerance, they can also try consuming a probiotic supplement that can help improve your gut health. Casa De Sante offers the Low FODMAP Colon Cleanse & Probiotic that is dedicated to producing products suitable for those with irritable bowel syndrome and other digestive issues.

Kefir is a fermented dairy product similar to yogurt in that it contains live and active bacterial cultures, although it also goes by the names Milk Kefir or Kefir Milk. Making kefir involves mixing milk with kefir grains and letting the mixture ferment for 24 hours.

Kefir milk is easier to digest than milk because the kefir grains feed on the lactose in the milk. Coconut milk is combined with kefir grains and let to ferment for 24 hours to produce coconut kefir. Kefir grains are added to goat milk to create goat milk kefir.

Kefir milk can be used to make smoothies, creamy salad dressings, or as a snack with your preferred crackers and cheese.

A SCOBY (symbiotic colony of bacteria and yeast) is added to sweetened tea and allowed to ferment for 14 days to produce kombucha, a type of fermented tea. Acetic acid, produced during the fermentation process, is what gives kombucha its zingy flavor. There are numerous ways to flavor this beverage. Look for flavors that might suit your preferences. You can consume kombucha straight up or substitute it for vinegar in recipes.

Another excellent source of probiotics is kvass, a rye-based fermented beverage. Rye bread is typically fermented with lactic acid bacteria to produce kvass. Vitamins and antioxidants are among the useful substances produced by fermentation. If you want a probiotic beverage other than kombucha or kefir, kvass is a good choice.

A fermented soybean paste is called miso. Soybeans are fermented for a year with the addition of koji, an Aspergillus mold type, to create miso. Miso is easier to digest than soybeans because the fermentation process breaks down the proteins in the soybeans. It’s better if it’s easier on the stomach.

Miso can be used as a marinade for meats and vegetables or as an ingredient in homemade salad dressings, soups, stews, and sauces.

One disadvantage of ACV is that it has a very strong flavor because of its acetic acid! If the flavor of the daily dose of apple cider vinegar is a little too overpowering, try switching to pickle juice. Probiotic benefits are comparable, and pickle juice is a good source of the minerals potassium and salt.

Milk that has not been homogenized or pasteurized is referred to as raw dairy. Raw milk is a fantastic probiotic-rich food since it contains a variety of enzymes and live, active bacterial cultures. But dangerous germs can also be present in raw milk, so it’s crucial to purchase raw milk from a reliable supplier. Raw milk can be consumed straight up or substituted for milk in recipes.

Cheese that hasn’t been homogenized or pasteurized is referred to as raw cheese. Make careful you buy from a trusted source, like we mentioned with regard to raw milk.

A fermented milk product known as buttermilk has been used for generations. Instead of using the water left over after making butter, cultured milk is now utilized to create buttermilk, which causes the milk to soured and thicken.

Drink it straight up or add a tiny quantity of tang to your baking recipes for lighter results whether making cakes, biscuits, or bread.

Tempeh is a fermented soybean product that is by definition fermented but does not contain living cultures because it is baked.

Soybeans are fermented into tempeh by adding a SCOBY (symbiotic colony of bacteria and yeast) and letting the mixture sit for 24 hours. Because the proteins in the soybeans are broken down during fermentation, tempeh is simpler to digest than soybeans. You can add tempeh to soups, stews, and sauces, add tempeh.

A special kind of bread called sourdough is created by giving the dough 24 hours to ferment. Lactic acid is produced during the fermentation process, giving sourdough bread its distinctive sour flavor. Any probiotics or live cultures present in sourdough bread’s fermented dough are destroyed during baking.

Compared to other breads, is sourdough bread healthier?

When examining the health advantages of sourdough bread, there are a few aspects to take into account.

First, compared to other breads, sourdough bread has higher levels of vitamins, minerals, and antioxidants. Additionally, phytates, a substance present in grains that can bind to minerals and reduce their availability to your body, are less prevalent in sourdough bread.

Sourdough bread has a higher nutrient density than most other types of bread and your body can more easily absorb its nutrients than it can from normal bread.

The fermentation of lactic acid, also known as lacto-fermentation, is the method used to create fermented vegetables. In addition to preserving the vegetables, this provides them a distinctive flavor that may entice you to eat them repeatedly. Numerous fermented foods, such as krauts, kimchi, and pickles, are produced by the lacto-fermentation process.

The fermentation process breaks down the vegetable cell walls, which facilitates the body’s absorption of the nutrients and serves as a fantastic source of probiotic microorganisms.

Use them as a side dish or garnish with your meals and snacks, as well as in dressings, sauces, and dips.

Unpasteurized Olives That Have Been Salt-Cured Or Brined

The process of making salt-cured olives involves salting olives and letting them ferment for a long time. By eliminating dangerous microorganisms, this method preserves the olives. Olives that have been salt-cured or brined are a delicious and effective source of probiotics. The majority of olives in supermarket stores are pasteurized.

Cucumbers are combined with salt, spices, water, and time to make pickles. Lactic acid bacteria are produced during the fermentation process, giving pickles their distinct and alluring flavor.

Now that you have a pantry full of probiotic-rich items, your digestive system will thank you.

It is evident that probiotics are present in a variety of common foods. You can make sure that you are getting a range of live and active cultures of bacteria by including these gut-friendly foods in your diet. This will support the health and happiness of your digestive system.