Nigiri vs Sashimi: What’s The Difference? 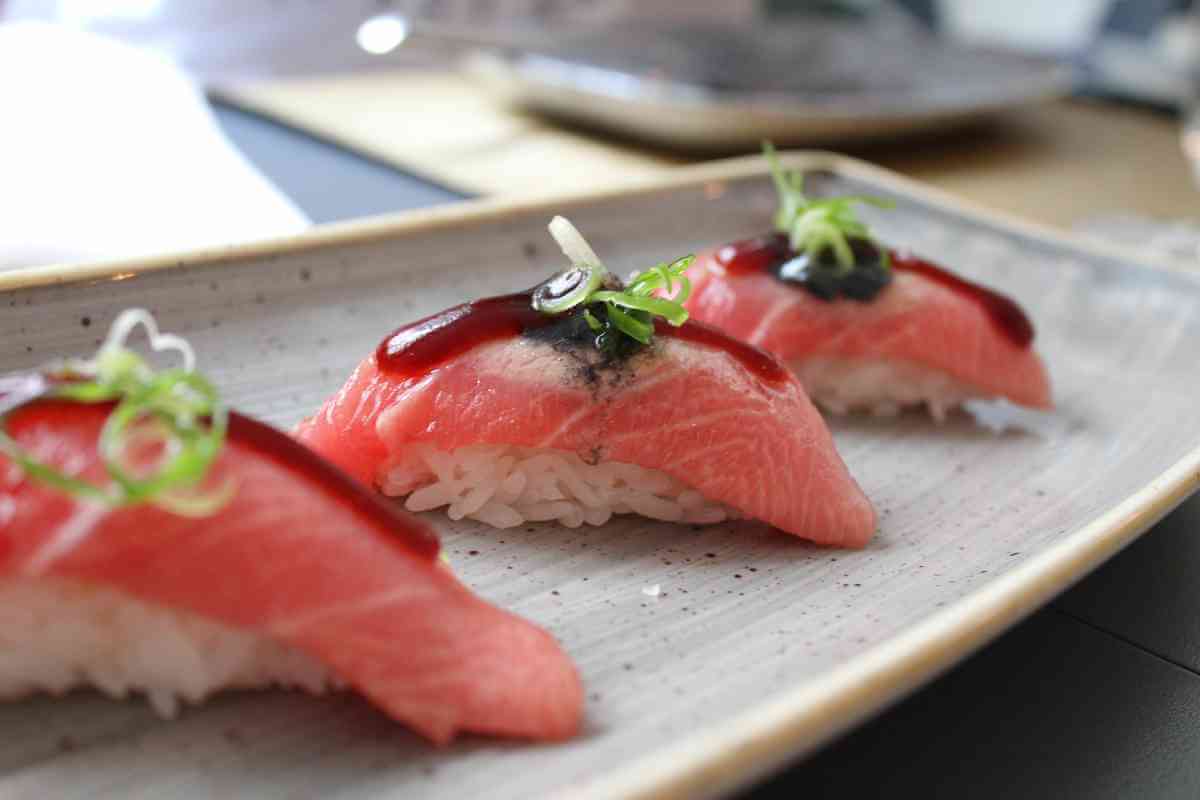 The difference between nigiri and sashimi can be a little confusing, especially because both words are often used to describe the same type of dish. Sushi lovers everywhere know that nigiri is a type of sushi made with vinegared rice topped with fish or other ingredients. But what about the similar-sounding word “sashimi”? Is it sushi, too? Let’s find out…

Both nigiri and sashimi are types of Japanese cuisine, but they are very different from each other. Technically speaking, sashimi is not a type of sushi at all, because it does not contain any vinegared rice.

Sashimi is primarily made from fresh fish that is thinly sliced and served without rice. Shrimp, octopus, squid, sea urchin and beef are just a few of the many types of sashimi available on the menu.

Nigiri is a type of sushi that consists of small clumps of rice with various toppings draped over them like fish roe, sea urchin or raw fish. The toppings rest on top of the rice, which is lightly salted and brushed with a sweet glaze called “su” or “mirin,” made from sake and sugar.

While many people think that nigiri always includes raw fish as its topping, this isn’t exactly correct; you can find several varieties that don’t include raw hamachi as the topping.

nigiri sushi is often sold as a piece, unlike sashimi. The toppings are usually placed on top of the rice with a tiny bit of wasabi between them and the clump of rice, or if it is a separate ingredient, next to the rice.

nigiri sushi can be made at home relatively easily, and like all types of sushi, it usually has to be eaten as soon as possible after it is prepared.

Sashimi is a raw dish consisting mostly of thinly sliced pieces of fish, but you can also find sashimi made from other types of seafood or even beef. Since it is not cooked, sashimi is incredibly fresh and absolutely delicious.

Unlike nigiri, sashimi is not served with rice under the fish. Instead, it is served on its own and often includes a tiny amount of wasabi between the meat and the plate or alongside it.

Nigiri Vs. Sashimi: The Real Differences

• Nigiri is a type of sushi that has rice under the topping, while sashimi pieces don’t have rice.

• Nigiri is often served as a single piece of sushi, but sashimi can come in small or large pieces.

• Sashimi doesn’t have to be eaten immediately after it’s prepared, so you can refrigerate it until you are ready to eat it.

• Sashimi is served at the beginning of a Japanese meal (appetizer), while nigiri is enjoyed during the second and/or third course.

• Sashimi is thin slices of raw fish or seafood that have been prepared in various ways with soy sauce and wasabi.

• Nigiri can be made at home, but sashimi is often reserved for fine sushi restaurants.

Nigiri And Sashimi: 2 Similarities Between The Two Of Them

• Both are types of Japanese cuisine that use fresh ingredients such as fish and seafood. Common types of fish used would be tuna, salmon and prawns.

• Both types of sushi are served in traditional Japanese restaurants with soy sauce, wasabi, ginger and pickled vegetables.

Can Both Nigiri And Sashimi Be Cooked At Home?

Sushi is an art that takes time to master, but you can learn how to make it at home relatively easily if you’re willing to practice a little until you get it right. nigiri sushi is quite simple because the meat or seafood toppings rest on top of the rice, but sashimi is a bit more complicated.

To make sashimi, you must slice fresh fish or other types of seafood as thinly as possible and then serve it immediately after preparation for best effect. You also have to make sure the fish is fresh because as soon as you start cutting it, the fish begins to lose its freshness.

It is difficult to do it yourself at home because of the time and attention you have to pay to preparation – plus, buying all that fresh fish for a single meal can be expensive!

Why Is Sashimi More Expensive Than Nigiri?

Besides the quality of meat or seafood used, sashimi also has to be sliced very thinly, so it takes a lot more effort to make. Preparing sashimi takes a lot more time and ingredients, which is why it costs more and is not always available in all restaurants, which makes it more exclusive and expensive.

nigiri typically uses a single topping per piece of sushi while sashimi comes with many different pieces therefore nigiri is relatively cheaper.

How Do You Know Whether To Choose Nigiri Or Sashimi?

Depending on the dishes you prefer to eat, there are many different types of sushi you can order. Each type varies in price, taste and what it includes.

Nigiri is mostly rice with a topping such as hamachi (yellowtail), unagi (eel) or ika (squid).

Sashimi comes with a single piece of meat, very thinly sliced and delicious when fresh – commonly tuna, salmon and prawns.

Each tastes subtly different from one another so it really just depends on how you feel and what you want to eat.

If it is your first time trying sushi, it might be best to start with nigiri as the meat sits on top of rice instead of just being thinly sliced on top of a plate. If the flavor is too strong the rice will help to balance it out.

On the other hand, if you like to enjoy the intense flavor of fresh fish or want to be adventurous, sashimi might be just right for you.

Some common types of fish used for nigiri include: yellowtail, eel and squid.

Some common types of fish used in sashimi may include; tuna (maguro), salmon (sake) and prawns (ebi).

Both nigiri and sashimi are delicious, but it really depends on your personal preference. Try ordering both at a Japanese restaurant so you can compare their flavors and textures!

If you’re still not sure how they’re different, you can try making both at home and tasting them for yourself. nigiri is a simple dish that’s not hard to prepare while sashimi requires a lot more care because it needs to be incredibly fresh. Despite their differences, both dishes are very tasty and worth giving a try!