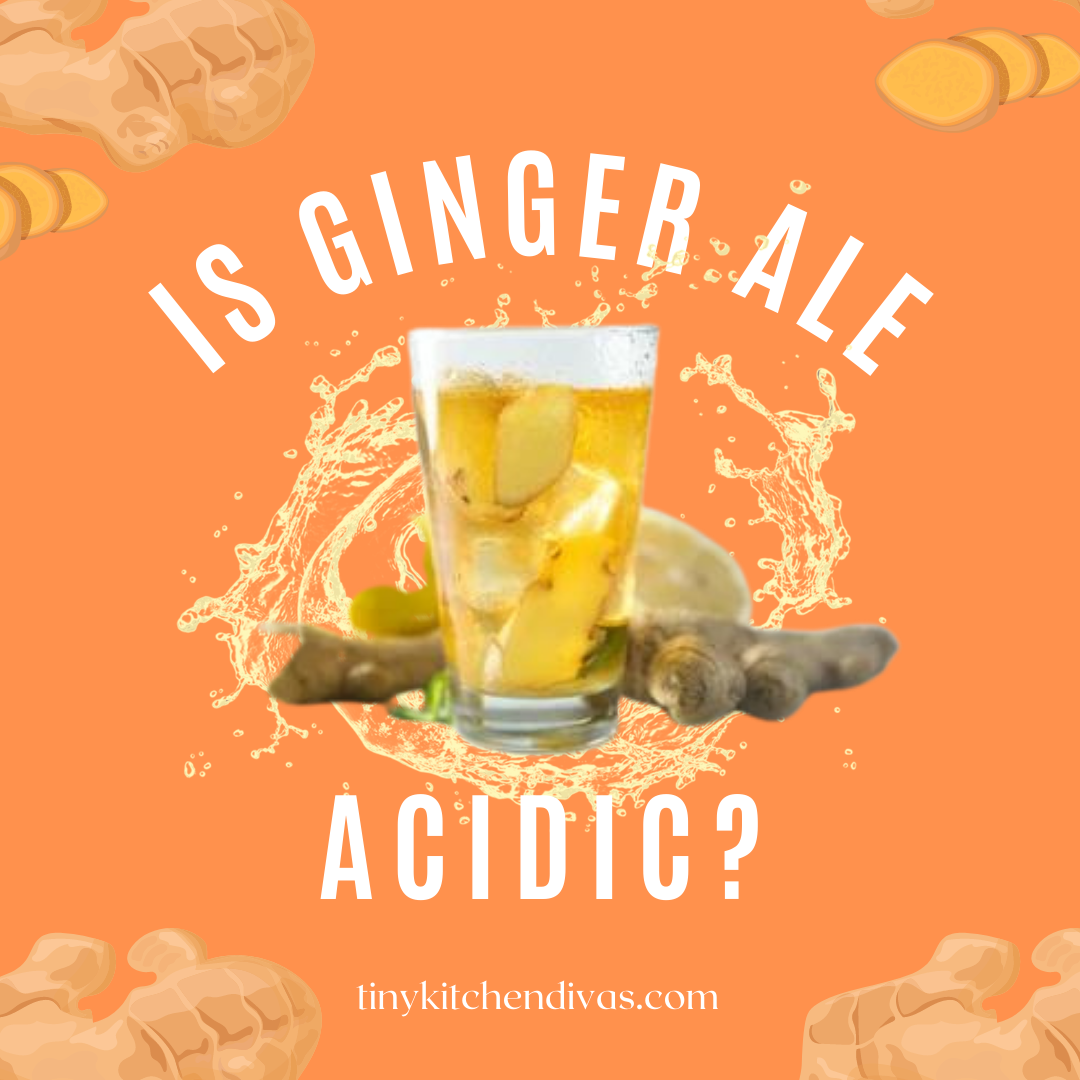 Ginger ale is a popular soda that contains ginger. Many people drink ginger ale to get rid of nausea, and it can be enjoyed as a regular drink. The carbonation in ginger ale comes from fermentation. The yeast, combined with sugar, water, ginger root, and other flavorings, forms ginger ale. The yeast is a single-celled fungus invisible to the naked eye that converts the sugar to carbon dioxide and ethanol.

To determine the pH value of ginger ale, scientists conducted research on its properties and composition of ginger ale. The study titled “pH Value, Total Microbes, Alcohol Content and Overall Hedonic Characteristics of Ginger Ale” was published in October 2020.

Ginger ale comes in a variety of flavors. The following are some of some popular ginger ales:

Sodas and the above-mentioned traditional ginger ales fall under this category. In addition, there’s ginger, sugar (or high fructose corn syrup), and carbonation.

The phrase “dry” appears to be a marketing term for ginger ales with a spicy ginger flavor.

This ginger ale contains artificial or calorie-free sweeteners in place of sugar.

Is Ginger Ale Acidic or Alkaline?

The pH of ginger ale is usually between 2.0 and 4.0. Ginger ale is acidic at this pH, making it unsuitable for a diet low in acidic foods.

Some persons with acid reflux and GERD may be able to eat acidic foods, but only in tiny amounts. One must avoid ginger ale in case of severe acid reflux or GERD. If you can tolerate small amounts of acidic liquids, you can occasionally enjoy ginger ale. It is minimal in calories and sugars when chosen with the right brand.

On the other hand, natural fresh ginger is more alkaline than ginger ale. So those with GERD can use ginger-infused water instead. It is healthier, less acidic, and has more minerals and nutrients because it uses actual ginger instead of artificial flavoring or ginger spice.

Is Ginger Ale Beneficial to Your Health?

Ginger ale is a carbonated beverage flavored with ginger and sweetened with sugar. It comes under the classification of soda, which means it’s not a healthy drink option. As a result, drinking sweetened, commercial ginger ales will provide no benefits but empty calories.

Although, if it contains fresh ginger, it gives some health benefits. Nausea due to morning sickness, food poisoning, chemotherapy, migraines, and stomach flu may benefit from ginger ale brewed with fresh, natural ginger. While it’s difficult to say why ginger is so beneficial, several studies suggest it’s because of the natural compounds contained in ginger, such as gingerols and shogaols. Although these components are more abundant in fresh ginger, ginger water may provide additional benefits.

Ginger ale is also naturally caffeine-free, making it an ideal substitute for soda and other caffeinated beverages. It also has less sugar than either type of soda, making it a somewhat healthier alternative or an excellent way to kick a soda habit. Furthermore, ginger ale has few additives than other beverages that help stay healthier. Therefore, substituting ginger ale for a standard sugary soda is healthy.

Is Ginger Ale Harmful to GERD?

As mentioned earlier, ginger ale is quite acidic and not recommended for persons who suffer from severe acid reflux or GERD. Meals and beverages with acidic pH might exacerbate symptoms of acid reflux. In addition, ginger ale is carbonated, aggravating the symptoms by irritating the stomach and esophagus and causing heartburn.

On the other hand, those with tolerance to acidic meals and drinks in moderation can occasionally treat themselves to ginger ale. The same thing about ginger and ginger water, both are acidic foods.

Everyone is different, so pay attention to how your body reacts to various things. For example, if the acid reflux or GERD is getting worse, arrange an appointment with the doctor to ensure you’re eating a good, balanced diet.

Those on a low-acid diet who want to drink ginger ale can look for the less sugary brands and varieties. Sugar is difficult to digest, which produces an increase in stomach acid production. Excess stomach acid is more likely to reflux up the esophagus. Thus one can reduce the risk by eating less sugary foods.

Is Ginger Acidic, or is it Ginger Ale?

The pH of fresh ginger is around 5.60-5.90. Therefore less acidic than ginger ale. This distinction is due to the carbonated water in ginger ale, which is quite acidic.

As a result, those who enjoy the taste of ginger ale but want to make it healthier and less acidic try creating ginger-infused water using still or mineral water at home. It gives ginger flavor, but you won’t be acidifying your body.

Fresh ginger is also an excellent ingredient in tea. It’s tasty, and it’s good for health because it’s high in antioxidants, minerals, and vitamins while being low in acidity. Unfortunately, tea has a lot of caffeine, so choose green tea or other caffeine-free varieties.

How to Pick a Better Ginger Ale

Ginger ale is a popular soda found in large supermarket sections. Start by reading the ingredient list and nutrition data panel on the back of the can or bottle to look for a healthier ginger ale. Added sweetness or non-nutritive sweeteners will be present in all ginger ale. Many ginger ales have a high sugar content and relatively little ginger.

Some ginger ales contain high fructose corn syrup (HFCS). HFCS has been linked to increased liver fat production, changed blood fat levels, and dangerous belly fat. Thus avoid HFCS-containing meals and beverages. Choose a ginger ale that does not have a lot of unnecessary components like artificial coloring. Look at the ingredient list to see if this is true.

How Ginger Ale is Different From Ginger Beer

A sip from the ginger ale cup has a carbonation and sugar flavor with a hint of ginger. When you reach for the ginger beer cup, it smells like ginger as you raise it to your mouth. The taste is sharp, spicy, and powerful. This beverage is ginger on steroids, with sweetness and carbonation relegated to the background.

The most prevalent ginger ale and ginger beer these days are very similar. Carbonated water, sugar, and ginger are the composition of this. Their pH levels were between 3.0 and 3.5 acidic when tested.

Ginger ale is a carbonated beverage made with ginger root plus a sweetener such as sugar, high fructose corn syrup, or a low-calorie sweetener. Many commercial ginger ales are sugary and low in ginger. On the other hand, traditional versions are produced from real fermented ginger root.

Ginger has anti-inflammatory and antioxidant properties that may benefit heart health, headaches, and nausea. Thus, ginger ale varieties with more ginger are beneficial for health.

However, due to its carbonation, ginger ale may induce increased gassiness. If ingested in significant quantities, the additional sugar it may contain can raise the risk of chronic diseases.

By reading the ingredient list, selecting a low sugar or diet type, and selecting one that meets your specific health goals and preferences, you can choose a healthier option.